When walking though Marale, I came across the town’s “loca” (crazy lady), Virginia. I was captivated by her, initially because she reminded me of a drawing that appeared next to a poem by the Cuban black poet, Nicolás Guillén, called “La Muerte” (Death). Her face was so skeletal. I believe she is homeless, living in the forest outside of the town. Her teeth were in terrible condition, she was in great need of a bath, her hair was uncombed and matted and her face had much dried-on dirt. I spoke to her, I wondered how long since a human being had touched her (physically or emotionally) and I wanted to hug her, but at that moment I did not find the courage. When I was talking to her, I did place my hand on the side of her face. 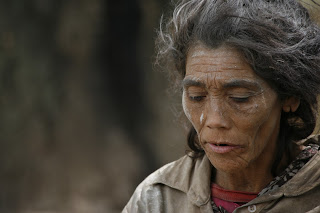 Later, when I spoke at the inauguration of the new homes there, I challenged the citizens to take care of Virginia as a collective responsibility of the town. The mayor and the people responded kindly to my challenge after my talk and promised to do something about her living condition. Some of the visiting mayors from nearby towns thanked me for bringing up that sensitive issue and promised to do something about the mentally challenged people of their towns.

Her face continues to haunt me.

To view more pictures, visit the Food For The Poor Facebook album.