I traveled to Guatemala on a Saturday with our national senior account executive from Salem Radio, five of my colleagues from Food For The Poor (FFP) and the 13 coolest Christian radio hosts (some also pastors) that one could ever imagine, coming from as close by as the west coast of Florida and as far away as Hawaii…

Maria Macario was a 61-year-old widow. She did everything possible to keep her family of twelve from succumbing to the ravages of poverty. She had, by her own introduction, five daughters and six grandchildren. It was only on further conversation with Adriana, the person that we thought to be her oldest daughter, that I found out that before becoming her daughter she had been her daughter-in-law. Maria was a brave widow who had only one son. He married Adriana and had given Maria four grandchildren. He took up with a mistress, and Maria, uncharacteristically and against all cultural mores, denied her only son and welcomed Adriana and the four children into her heart and home. 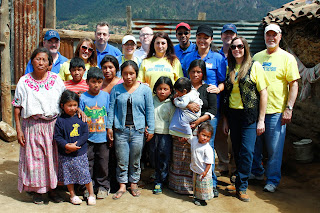 “I was ten when I lost my parents,” said Adriana crying, “I had no family but this one, no home to which to return.”

If that household were a drama, sorrow and pain would be the lead characters.

Maria lost her husband to poverty and hunger. They live close to a ravine that becomes a swift river with the areas frequent torrential rains. Often, the animals that perish with the floods are swept downstream in these waters. Maria’s husband, using a pole with a hook, tried to fish one of these animals from the fast moving waters in order to give his family the protein that they needed and could never afford to buy. The current pulled him into the water and he drowned – a good man lost his life for the Guatemalan equivalent to road kill.

The tiny house was divided into two even smaller rooms. Adriana and her four children lived in one, while Maria, her other daughters and grandchildren shared the other. Of all the places we had visited, the humidity here was the worst. Adriana explained that when it rained, the room got filled with slimy slugs. They got in through the many holes in the mud walls. They had used cornhusks to plug them, but it was a losing battle. They had collected some in a plastic cup as evidence of what she was saying. As we looked at the wall and the plugged holes, we saw a large long-legged spider. Adriana spoke about the fear of sleeping on the floor and the horrible sensation of stepping on the slugs at night with bare feet.

Adriana’s pain was palpable. Whether she was expressing appreciation, affection or hurt, the expression of her profoundly haunting sorrowful eyes was unchanged. It was as if she were the gatekeeper of the world’s anguish and her mouth was the floodgate – every time it opened tearfully, it reduced us all to tears.

Everyday, the family goes to the garbage dump, like so many from that area, to search for food. “We are animals,” Adriana said, “we battle the dogs, the pigs and the goats to get the food at the dump away from them for our children to survive.”

When speaking about the constant fear in which she lives that she may lose her children to hunger and to the unhealthy living conditions, she said, “I wake up in the night weeping and I cry out to God, ‘Lord, I know I am not alone, but until when will I suffer without deliverance. Until when Lord?”

Until when Lord? Adriana had imprinted her sorrow deeply unto my heart.