On Monday, Oct. 4th, 2010, I landed in Tegucigalpa, the capital of Honduras, (one of the scariest airports for landings and take-offs in the world). There is a very large mountain that appears to be right at the end of the runway – no matter whether you are taking off or landing! This was to be a “good news” trip because we were visiting there to inaugurate a number of housing and self-sustainability projects all over the country. Food For The Poor (FFP) has funded these communities in collaboration with CEPUDO, a local organization with which we partner that is devoted to the betterment of the lives of the poor, particularly women and children. The tireless, dynamic Linda Coello, who has recruited similarly energetic people to help her with her mission, leads CEPUDO, as founder and President. 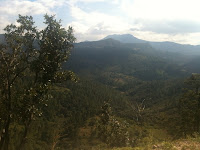 We immediately set out for Valle de los Angeles in the mountains outside of the capital, where we inaugurated a village of high altitude, surrounded by beautiful mountains, with two nearby rivers whose rolling waters added their calming songs to the area. Truly, it felt as if there would be Angels hovering nearby. The homes looked like colorful chalets, and I joked with them when I was invited to speak, reminding them that my name was Angel and therefore they should build one of the homes for me in this special place. The happiness of the new homeowners was palpable and I reminded everyone that they should be very proud as they all, from youngest to the eldest, contributed their labor to achieve the completion of these long-awaited homes. I felt that I was in heaven – almost literally!

The community was named to honor Fr. Peter Drouin, a Canadian priest who devoted many years to helping the extreme poor of that vicinity. The First Lady of Honduras, Rosa Elena de Lobo, attended the inauguration. The community regaled us with music, folk dances and delicious food. A beautiful young lady, dressed in typical costume, invited me to join the dancers, despite my natural shyness :o), I quickly joined her on the stage area and allowed my Cuban/Jamaican heritage to come to my aid. I love to dance!

We then left for Nacaome, and I was warned repeatedly on the three and a half-hour ride, that even though it was their “cool time,” the city was well known to be the hottest in the country. We arrived at night and it was pleasantly cool. I gently chided my companions for their exaggerations. The next day, I went for an early morning walk in the city and it was equally cool. I felt myself wondering if the Hondurans in the group really new the meaning of the word “hot”. Having lived in Santiago (Cuba), Kingston (Jamaica) and South Florida all my life, I really understood “hot” – and that wasn’t even close to what I’ve experienced! 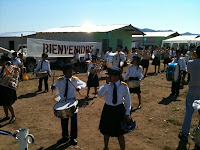 We left for the inauguration of homes at a place formerly called El Agujero (The Hole), but since receiving their new homes, the residents have changed the name to Valle de la Esperanza (Valley of Hope). At about 9:30 that morning, the gates of hell opened and it rained fire on that area as we all sat at the head table with sweat pouring off of us. It really was hot! My Honduran friends looked at me (rapidly dehydrating) with a knowing smile that shouted out, “I told you so!” – At the Miami airport, on the way back home, I met a young man from Honduras who was studying medicine in Madrid. He asked about our work in Honduras and I told him about the inaugurations. When I mentioned Nacaome, he said that he was from that area and he added that, “everyday at noon, the devil comes down to Nacaome in order to sell the cold sodas that he can’t sell in hell!” 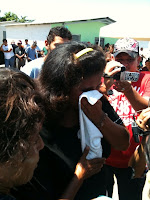 The inauguration in Nacaome was an emotionally charged experience. Many of the women cried tears of happiness at the thought that the concept of being homeowners had suddenly become a reality. The poignant words of one of the women of the community that received a home truly touched my heart.

Someone pointed out a young woman to me, Guerlinda, and explained that when she was found to be HIV+ by her family, they threw her out of the house. An elderly woman from that village, Doña Francisca, took her in, nourished the sickly young woman whose health had deteriorated from being homeless and completely broke, and has treated her as a newly-found daughter since that time. I was so happy that now they would be able to live more comfortably, sharing their
new home.

I later had the opportunity to speak to Doña Francisca. I gave her a big hug and told her that I had heard of what she had done for Guerlinda. She looked at me with tears in her kind eyes and said, “We are poor, but even the poor can give.” So close to tears… 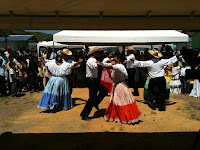 Again, we were treated to lively music, beautiful folk dances performed by small kids and adults, food, drink and many hugs. The poor have so little, but they are generous in giving what they have.

From here we traveled about half-hour to an area of Nacaome called The Corner of the Donkey. We also built homes here. The villagers testified that one of the women of the community had had a vision from God in her sleep that the community would receive homes, and in less than a year that vision turned out to be prophetic. Again, the villagers expressed their gratitude for their newly acquired homes, as their homes before were literally sticks and plastic sheeting. They have since changed the name of the community to “Rincon de los Milagros” (Corner of Miracles).

It struck me, as I heard of the new name, that our donors, our staff and our partners in the countries we serve are truly performing miracles. I witnessed miracle after miracle on this trip to Honduras. Unfortunately, we have many left to perform, so let us be strong and take heart. We shall continue in our relentless pursuit of the miraculous! 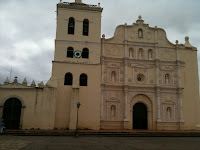 From here we drove to Comayagua – a beautiful colonial city surrounded by both mountains and extreme poverty. Julio, our photographer for this trip, accompanied me on a two-hour walk/conversation exploring the beauty of this ancient city. In the morning I also took a more lonely early-morning walk and was able to see the inside of the charming Cathedral/Basilica of this first capital city of Honduras. The stay at the hotel, albeit for only one night, was typical of the city in its charm and loveliness.

After an early breakfast, we drove out to an area outside the city where is housed the technical mission of our wonderful partners ICDF (Taiwan), the charitable arm of the Taiwanese government. They have gifted FFP and the poor with their expertise in aquaculture (tilapia farming), agriculture, animal husbandry and education/technology. 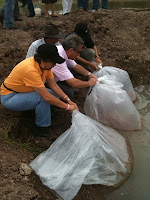 On this occasion we joined them for the inauguration of five tilapia ponds, each with a capacity for 10,000 fish. We released 10,000 fingerlings into each pond and we thought of the tremendous difference that 50,000 adult tilapia would make to that community, both nutritionally and financially.

We then traveled with them up the mountain to inaugurate a “pelibuey” (hair-sheep) project. These are sheep that have hair instead of wool and they are known for the quantity and quality of the meat they produce. The herd of 50 females and 5 males are a mixture of hair-sheep and black-belly sheep. The recipients expressed deep appreciation for this wonderful opportunity that they had been given to feel the pride of supporting their own families through this project.

On to the long ride to get to Peña Blanca (White Rock) where we were inaugurating 12 homes in a community with a very interesting history. Fifty years ago, an American doctor from Texas decided to move to this area of Honduras and, together with his beautiful wife, he devoted his life to the care of the poor residents of the area. The couple founded an orphanage, which is still run by family members (a daughter and granddaughter who is a nurse) and they truly thought of the children there as their children. Sadly, Dr. Johnburg passed away some years ago, but his 89 year-old widow was there for the celebration. Her energy was incredible, as she maneuvered herself with a walker on the difficult, wet, sloping terrain while recuperating from a broken hip! Her eyes sparkled with love for her adoptive children and her smile was contagious. 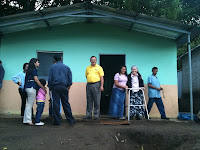 It poured almost the entire time that we were there, but this did not dampen the spirits of any of those present. We were regaled with music and songs from a children’s choir and a trio of women, home recipients. All were originally orphans from the aforementioned orphanage. They harmonized beautifully as they sang a rendition of two Christian songs. As we listened, our shoes were stuck in the mud, but our spirits were soaring like kites. Beautiful evening!

Marale, in the department of Francisco Morazan, was likely the hardest hit area by Hurricane Mitch in 1997. They suffered great loss, including loss of life. Many promises had been made to them, but little was done. Now, for the first time, promises were fulfilled in the form of 44 new homes for the families living in the worst condition. I was proud to represent FFP in bringing a ray comfort into their chronic and profound suffering. 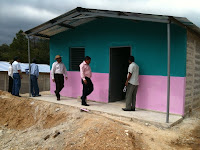 One can see the deeply-etched sadness in the faces of the people there. One of the speakers stated that the name of Marale has been written with pain, suffering, tears, sweat and blood. At long last there was some relief.

The town of Marale was amidst the department’s many mountains. The town’s one church, Church of the Black Christ, dominated the town atop its highest point. The road from the church led one down to the humble but quaint town square – a town obviously lacking resources.

When walking though Marale, I came across the town’s “loca” (“crazy lady”), named Virginia. I was captivated by her, initially because she reminded me of a drawing that appeared next to a poem by the Cuban black poet, Nicolas Guillén, called “La Muerte” (Death). Her face appeared skeletal. I believe she is homeless, living in the forest outside of the town. Her teeth were in terrible condition, she was in great need of a bath, her hair was uncombed and matted. Her face and hair were covered with dried-on dirt. When I spoke to her, I wondered how long since a human being had touched her (physically or emotionally). I wanted to hug her, but at that moment I could not find the courage. While I was talking to her, I did place my hand gently on the side of her face.

Later, when I spoke at the inauguration of the new homes in the village, I felt compelled to challenge the citizens to make efforts to take care of Virginia as a collective responsibility of the town. The mayor and the people responded kindly to this challenge after my talk and promised to do something about her living conditions. Some of the visiting mayors from nearby towns thanked me for bringing up what was surely a sensitive issue and they promised to do something about the mentally challenged people of their towns as well.

I have made a promise to myself that one day I will return to give her the warm hug that I was not brave enough to give her during our first brief encounter.

Her face continues to haunt me.

To view more pictures from Angel’s trip, please visit the Food For The Poor Facebook album.